California Democrat Eric Swalwell blasted the father who said, “Let’s Go, Brandon,” to Joe Biden during last week’s holiday call and said that he and the Republicans who thought the quip was funny are “indecent to the core.”

The congressman who had an alleged affair with a Chinese spy for several years and inexplicably still sits on the House Intelligence and Homeland Security Committees jumped to Twitter on Christmas Day to attack the Oregon father who delivered the LGB joke during the White House holiday call.

“Don’t waste your time on the pathetic dad who humiliated his family to say F-U to the president on Christmas Eve,” Swalwell carped. “He’s irrelevant. Spend your time asking why Republican leaders are celebrating him. This isn’t my parents’ Republican Party. This new crew are indecent to their core.”

The LGB jibe was spoken by Jared Schmeck, a father of four and former police officer, who happened to get through to the NORAD Santa Tracker call when Biden was speaking to parents calling in with their children to see where Santa was.

Schmeck later said that he was joking and added, “At the end of the day, I have nothing against Mr. Biden, but I am frustrated because I think he can be doing a better job. I mean no disrespect to him.” 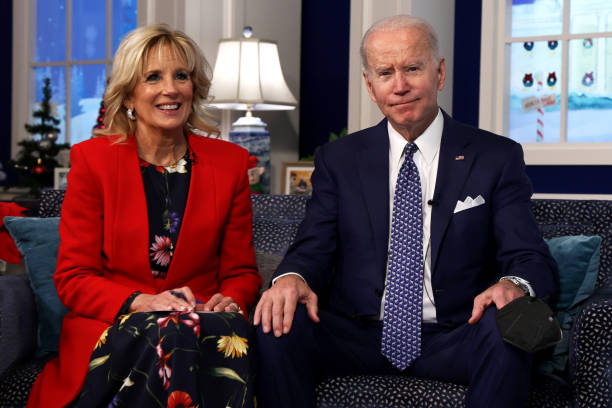 WASHINGTON, DC – DECEMBER 24: U.S. President Joe Biden and first lady Dr. Jill Biden participate in an event to call NORAD and track the path of Santa Claus on Christmas Eve in the South Court Auditorium of the Eisenhower Executive Building on December 24, 2021 in Washington, DC. (Photo by Alex Wong/Getty Images)

Still, Swalwell is intimately familiar with what is “indecent.” Last year, reports revealed that Swalwell had developed an alleged sexual relationship with a Chinese spy named Christine Fang Fang. The reported relationship occurred while he was a sitting Congressman and lasted from 2011 to 2015 when federal intelligence officials finally alerted Swalwell to their concerns over her activities for the enemy.

Swalwell has never been held to account for his alleged involvement with an enemy spy and only remarked that it was “a blunder.” Indeed, Swalwell brazenly proclaimed the whole story merely a right-wing conspiracy, even as he has never denied falling for the honey trap and having a sexual relationship with the spy.