Vice President Kamala Harris celebrated the beginning of Kwanzaa Sunday night, an underlying Marxist holiday created by black nationalists, by praising one of the “seven principles” of Kwanza, which happen to coincide with the seven principles of the Symbionese Liberation Army.

“When I was growing up, Kwanzaa was a special time. Friends and family members would fill our home. We would listen to the elders tell stories and watch them light the candles on the kinara,” Harris said, recalling her childhood memories of Kwanzaa in similar fashion to her remembrance last year.

“During dinner, we would discuss the seven principles,” she continued.

“My favorite principle is the second: Kujichagulia (self-determination). This principle is about having the power to design your own life and determine your own future. It’s a deeply American principle,” she claimed. “From our family to yours, happy Kwanzaa”:

My favorite principle is the second: Kujichagulia (self-determination). This principle is about having the power to design your own life and determine your own future. It’s a deeply American principle. From our family to yours, happy Kwanzaa.

Absent from Harris’s well wishes is the background behind Kwanzaa, which was created by Maulana Karenga, founder of United Slaves, the “violent nationalist rival to the Black Panthers,” as conservative author and columnist Ann Coulter described:

Now we know the truth: The FBI fueled the bloody rivalry between the Panthers and United Slaves. In the annals of the American ’60s, Karenga was the Father Gapon, stooge of the czarist police. Whether Karenga was a willing FBI dupe, or just a dupe, remains unclear. The left has forgotten the FBI’s tacit encouragement of this murderous black nationalist cult founded by the father of Kwanzaa.

The esteemed Cal State professor Karenga’s invented holiday is a nutty blend of schmaltzy ’60s rhetoric, black racism, and Marxism. The seven principles of Kwanzaa are the very same seven principles of the Symbionese Liberation Army, another invention of The Worst Generation.

In 1974, Patty Hearst, kidnap victim-cum-SLA revolutionary, famously posed next to the banner of her alleged captors, a seven-headed cobra. Each snakehead stood for one of the SLA’s revolutionary principles: Umoja, Kujichagulia, Ujima, Ujamaa, Nia, Kuumba, and Imani. These are the exact same seven “principles” of Kwanzaa.

A 1978 article in the Washington Post has Karenga describing his holiday thusly:

“People think it’s African. But it’s not. I wanted to give black people a holiday of their own. So I came up with Kwanzaa. I said it was African because you know black people in this country wouldn’t celebrate it if they knew it was American,” he said.

“Also, I put it around Christmas because I knew that’s when a lot of bloods (blacks) would be partying!” he added. 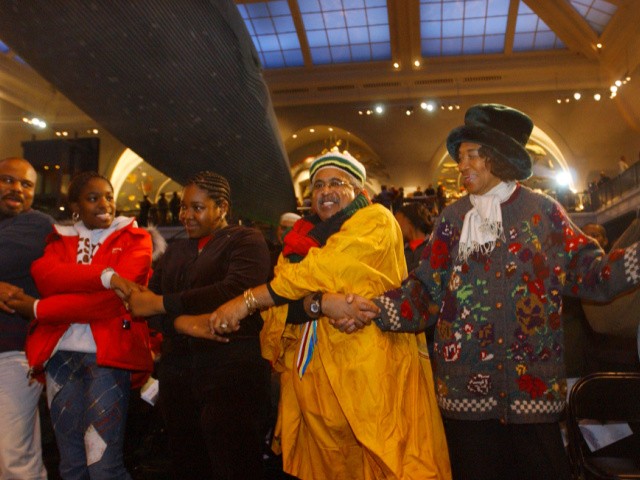 Nonetheless, other high profile figures, including President Biden, have openly extended Kwanzaa greetings: “May this time of reflection on the rich heritage of African American culture bring peace, unity, and joy”: