President Joe Biden's administration has turned Fort McCoy in Monroe County, Wisconsin, into a “small city” for Afghans brought to the United States, including “culturally appropriate clothing and food,” a new report details.

Fort McCoy is housing the most Afghans of all the bases, according to a report by Time magazine, and has become a small city of sorts for the new arrivals who have not completed immigration processing.

“Fort McCoy, a sprawling Army base surrounded by miles of cornfields and Christmas tree farms, is hosting the largest population of new Afghan evacuees in the U.S.,” Time reports:

Since the first families arrived in late August, it has grown into a small city of more than 12,600 refugees, almost half of them children, along with thousands more military and support staff. For the Afghans, it has been a blur of government interviews, paperwork, vaccinations, and talking to family left behind when they fled Kabul amid the chaotic U.S. withdrawal. [Emphasis added]

But by the time a small group of reporters received a tightly-controlled tour on Sept. 30—the first time journalists were allowed onto the base—their surreal new life seemed to be settling into a routine. Afghan families have been sorted into neighborhoods of orderly white barracks, where they are waiting for their immigration paperwork, employment authorizations and health screenings to be processed. Most children seem to have recovered from the initial shock of a sudden, frenzied evacuation that tore them from their homes, according to volunteers. Kids are visible everywhere on the base, high-fiving soldiers, playing outside, and making arts and crafts while their parents learn key phrases in English classes. (“Would you like to pay in cash or card?”) Along with vaccinations, they are being given culturally appropriate clothing and food, military officials say. [Emphasis added] 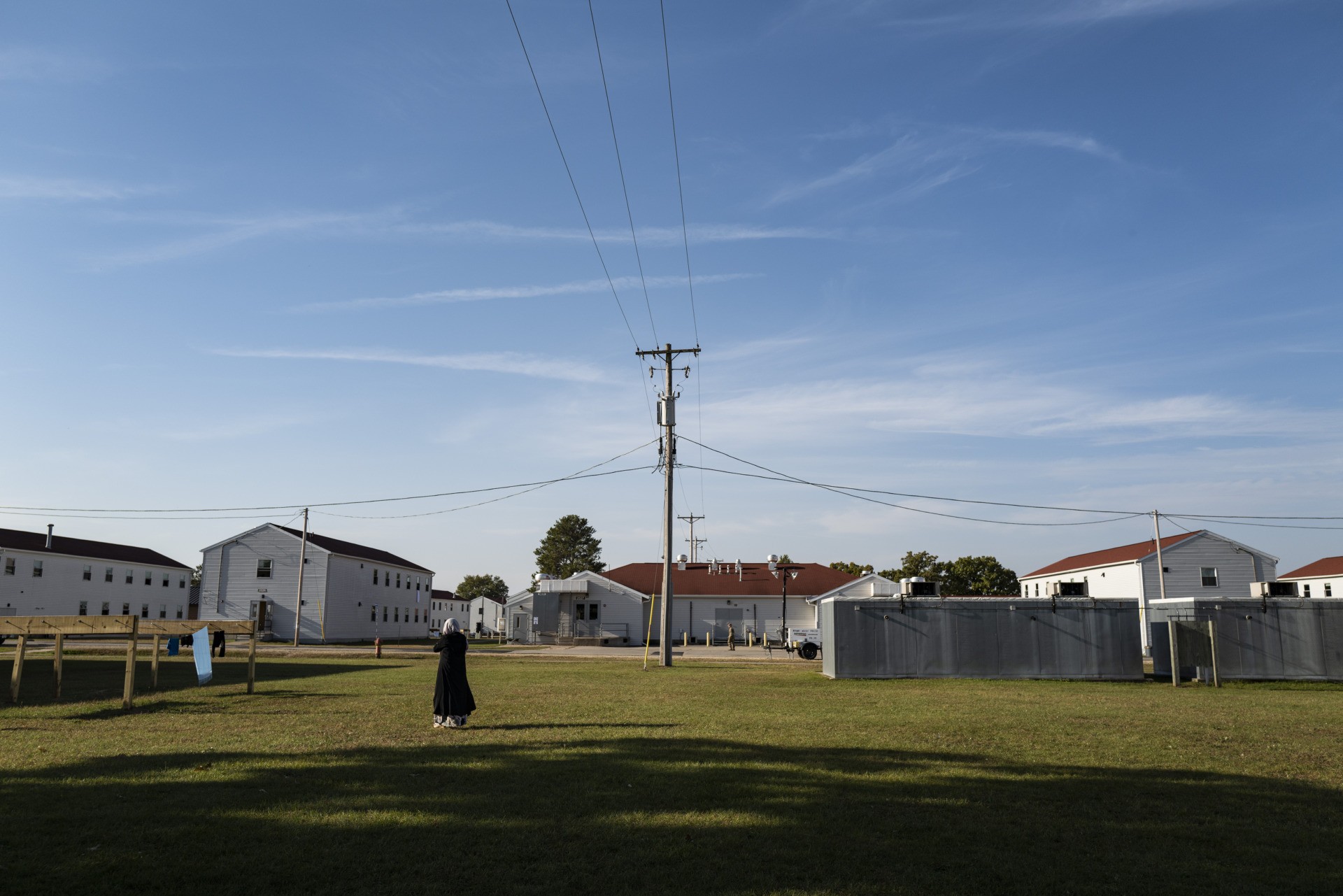 An Afghan refugee walks in the Village, where they are temporarily living at Ft. McCoy U.S. Army base on September 30, 2021 in Ft. McCoy, Wisconsin. (Barbara Davidson/Getty Images) 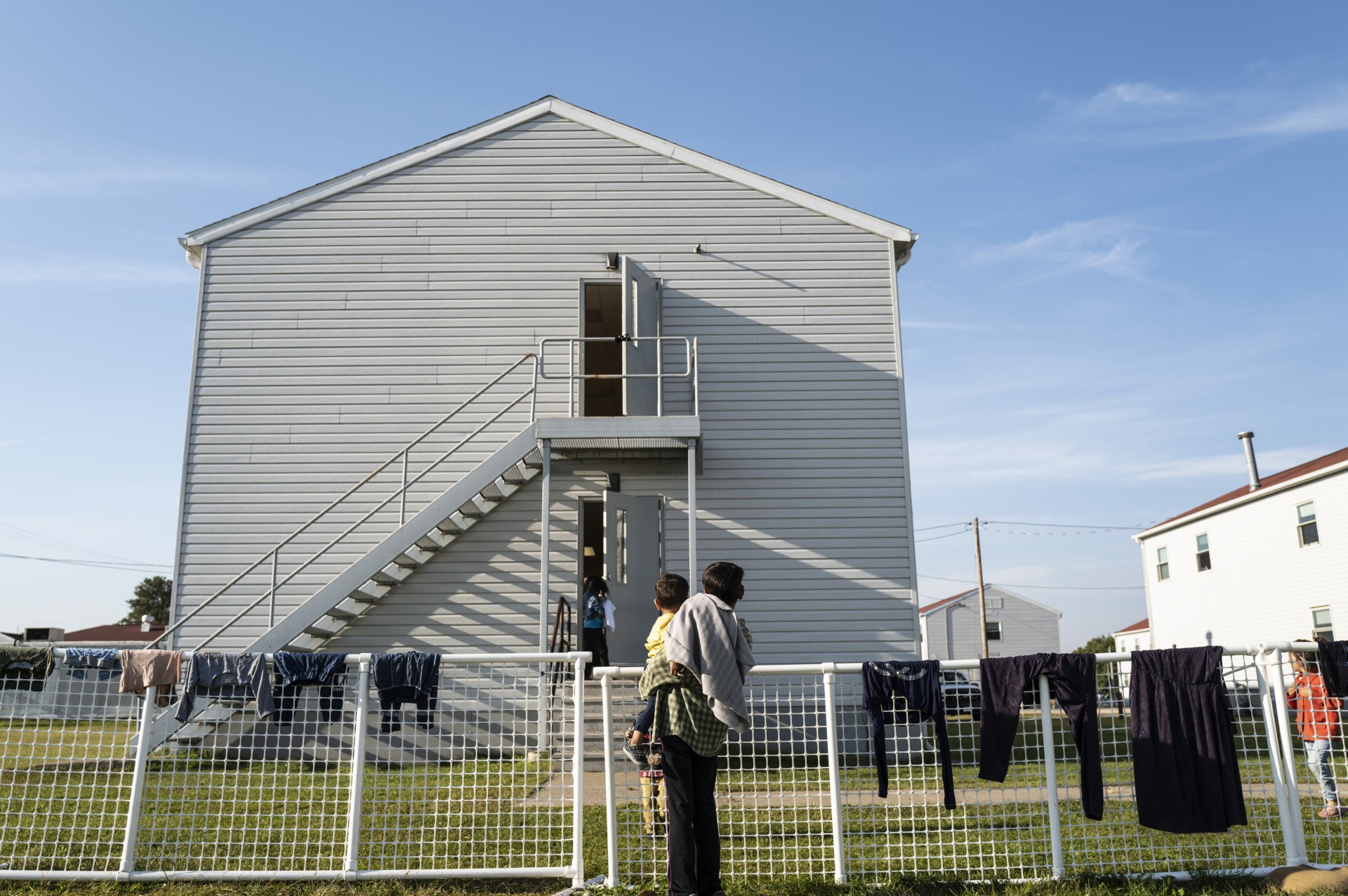 Afghan refugees stand outside housing in the Village, where they are temporarily living at the Ft. McCoy U.S. Army base on September 30, 2021 in Ft. McCoy, Wisconsin. (Barbara Davidson/Getty Images)

In a recent report, the New York Times called the U.S. bases “small cities” for Afghans. A handful of single Afghan women at Fort McCoy told the Times that they were harassed by Afghan men for being on the base without male counterparts.

“We were told, ‘How are you here without your male family member? We won’t tolerate this,'” one of the single Afghan women, 23-years-old, recalled. As a result, military officials had to move all single Afghan women into their own neighborhood on the base to avoid confrontations with Afghan men.

A former Afghan Air Force pilot told the Times that the Afghan children on the base “are the future of the United States” and stated that “they will be scientists, engineers.”

Biden is hoping to bring at least 95,000 Afghans to the U.S. over the next year.