China's top English-language propagandists mocked President Joe Biden on Tuesday following the announcement that he would allow the U.S. to play in the 2022 Beijing Winter Olympics but withhold uninvited politicians, comparing the move to charging “an appearance fee to go to public restrooms.”

The Biden administration has branded the move a “diplomatic boycott,” claiming it was “the right move” and sent a “clear” message that America did not approve of China’s long list of ongoing human rights atrocities, most prominently the genocide of the Uyghur ethnic people through the use of mass sterilization campaigns and concentration camps.

Chinese government-run media outlets, their opinion personalities, and the Chinese Foreign Ministry have all repeatedly noted that the diplomats Biden’s officials claim are “boycotting” the event were never invited and play no role in the actual execution of the athletic events scheduled to occur.

The International Olympic Committee (IOC) and governments around the world have faced growing pressure from human rights groups and the victims of Chinese communism to postpone or relocate the 2022 Winter Olympics and avoid rewarding the Communist Party with an honorable global platform.

The IOC has adamantly refused to acknowledge the concerns, insisting it has no power to keep the Olympics out of the hands of tyrants because “we are not a world government.”

Olympics sponsors have also refused to stop funding the event despite the evidence that their money will go towards eliminating ethnic and religious groups unpalatable to the Chinese Communist Party. Companies like Coca-Cola, AirBnb, Intel, and Visa have retained their status as Olympic “partners” and justified the move claiming they only aim to benefit participating athletes. 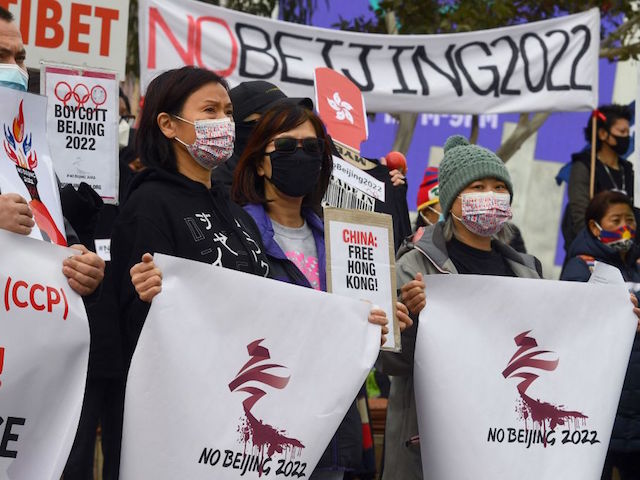 Activists including members of the local Hong Kong, Tibetan and Uyghur communities hold up banners and placards in Melbourne on June 23, 2021, calling on the Australian government to boycott the 2022 Beijing Winter Olympics over China’s human rights record. (WILLIAM WEST/AFP via Getty Images)

“Allowing China to host the Olympics, a very prestigious international event, in light of the Uyghur genocide and numerous other human rights abuses, is indefensible,” Koen Stoop, the E.U. policy director for the advocacy group the World Uyghur Congress (WUC), told Breitbart News in August.“The Chinese government will undoubtedly make use of this occasion to promote itself to the rest of the world, presenting China as a state that, contrary to reality, is not one of the worst human rights violators of this century.”

On Twitter, a platform Chinese citizens without high-level connections in the regime cannot access, some of the Communist Party’s most obnoxious mouthpieces mocked the formal announcement that the American team would participate in what human rights advocates have dubbed the “Genocide Olympics.”

Chen Weihua, a notoriously misogynistic editor with the state-run China Daily, repeatedly responded to news of the diplomatic “boycott” by stating, “you’re not invited.”

Chen regularly mocks Biden for his age on Twitter and suggests that Biden is suffering from dementia.

In another post, Chen repeated, “you are not welcome anyway,” accusing American diplomats of having “too much virus” – a reference to the Chinese coronavirus, which originated in Wuhan, China, and became the driver of an ongoing pandemic that the Chinese Communist Party directly caused.

Hu Xijin, the editor-in-chief of the government-run propaganda newspaper Global Times, called the Biden administration “super narcissistic” in response to the loud declaration that it would not send politicians to an athletic event and, like Chen, implied that Biden administration officials are Chinese coronavirus superspreaders.

In a separate message, Hu joked that the “diplomatic boycott” was akin to asking “for an appearance fee to go to public restrooms in foreign cities.”

White House Press Secretary Jen Psaki announced on Monday that the U.S. would participate in the Beijing Olympics, asserting that the Biden administration officials “look forward to” supporting athletes as they participate in an event that legitimizes a genocidal regime.

That clarity was apparently lost on the Chinese Foreign Ministry, which appeared baffled on Monday at the idea that uninvited politicians not crashing the event constituted some form of hindrance for Beijing.

“US politicians keep hyping a ‘diplomatic boycott’ without even being invited to the Games,” ministry spokesman Zhao Lijian said. “This wishful thinking and pure grandstanding is aimed at political manipulation. It is a grave travesty of the spirit of the Olympic Charter, a blatant political provocation and a serious affront to the 1.4 billion Chinese people.” 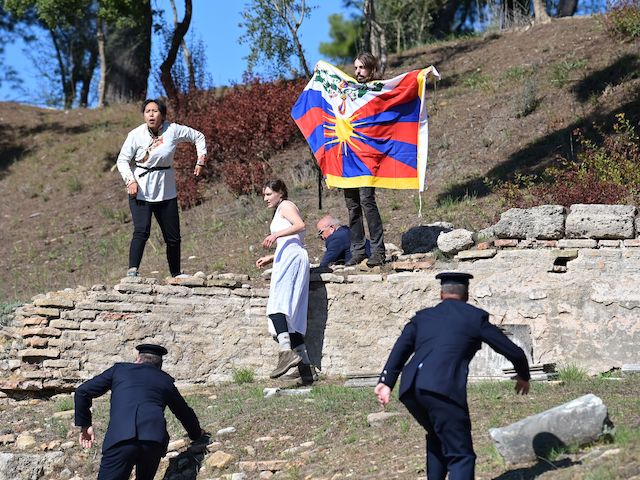 Protesters holding the Tibetan flag crash the flame lighting ceremony for the Beijing 2022 Winter Olympics at the Ancient Olympia archeological site, birthplace of the ancient Olympics in southern Greece on October 18, 2021. (Aris Messinis/AFP via Getty Images)

The Xinhua News Agency, another Chinese government mouthpiece, called the move “no more than a self-invented and politically convenient excuse for Washington.”

“At a time when unity is needed above all else, such a boycott will not only cripple and disrupt global solidarity but also serve as a fatuous gesture,” Xinhua asserted.

The Chinese mission to the United Nations dismissed the move as a “farce.”

“The success of the games does not rely on the attendance of a handful of countries’ government officials,” the mission said in a statement, adding, “whether you come or not, the Beijing Winter Olympic and Paralympic Games are there, and will be a success.”